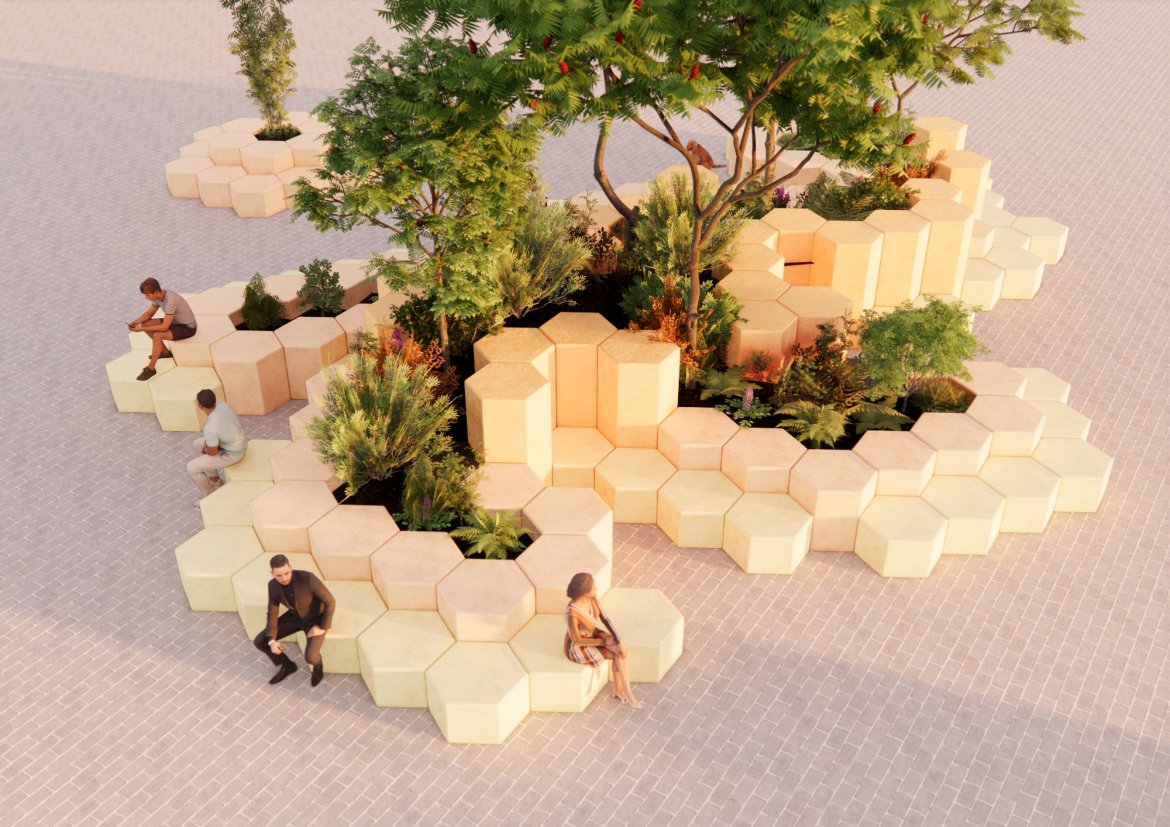 The King's Cross Design District this year focuses on the future of design, from showcasing the 'material heroes' with this commission of prototypes for urban space.

'Hemp-Clay-Lime : Urban Seating' is a presentation of the research and development by smarin and constitutes the initial testing phase for a future large-scale public realm seating scheme.

Materially, the core is made from hemp shiv, a waste product from the hemp fiber industry, and hydrated lime. the outer layer is a fibrous lime plaster, colored with clay. Both hemp and lime are incredibly hard-wearing, naturally derived materials, they are also considered to be carbon negative, as they capture more carbon than it takes to produce and transport them.

Hempcrete combines shives with lime and is increasingly used as a construction and insulation material. It has been described as 'carbon negative' or 'better-than-zero-carbon' as more carbon is taken out of the atmosphere through the growth of the hemp plant than is emitted in its processing or use.

With a short cycle of 100 days, this crop remains very interesting for the farmers because straw and seeds (hemp seed) are recoverable.
The production of hemp is carbon negative, which means it absorbs more carbon from the atmosphere during its growth than is emitted by the equipment used to harvest, process, and transport it.

One hectare of industrial hemp can absorb 15 tonnes of CO2 per hectare. It is possible to grow two crops per year so CO2 absorption can be doubled.

limestone is one of the most abundant materials on Earth.
widely known for its role in the construction industry, it is often described as carbon neutral thanks to the 'lime circle'. In this process, limestone is heated and turns into calcium di-hydroxide, releasing carbon dioxide. The resulting powder can then be mixed with coarse aggregates such as sand, and water, and used as mortar. As the mortar hardens it re-absorbs carbon dioxide, hence its description as 'carbon neutral'.

Ancient Romans uses hydraulic lime and added natural components to ensure the hardening of plaster in wet or cold conditions. The fact is that very ancient sculptures have lasted so long in the testament of the durability of lime plaster.

The city dwellers consider the urban space, no longer simply as a place of passage, but as a destination for walking, without a specific objective.
The spaces designed by street furniture become the image of the city and convey its commitments.

Hexagon-shaped, the modular design mimics the efficiencies found everywhere in nature and constitutes a de-hierarchical framework of interactions.

smarin constantly explores the shapes, structures, and textures of nature.
The narrative forms as the principles of the sets allow to play with scales, landmarks, and persistent archaic images and thus provoke a feeling of openness to a sensual interior world. Biomorphic layouts, with disproportionate proportions, engage in reverie.

If each object has its own specific contour and acts alone, it is part of a collection of complementary forms, which, once composed together, draw a re-scaled landscape adapted to the space it invests and transformed by its presence.

The next steps for this scheme, after the initial testing phase, is to have the carbon capture ability of this project properly assessed in order to have proof of CO2 neutrality or beyond.
All the materials are biodegradable and can be broken up and added back to the earth in the event of decommissioning.

Super Nature is a King’s Cross initiative in which we explore design, materials, and production methods that have a positive impact on people and the planet. The idea is to use art installations and the cultural program at King’s Cross as a way to facilitate conversations and collaborations and most importantly, to bring about change.

Super Nature is the seed of an idea and a small part of what will be a long and complicated journey for the King’s Cross Estate to become ‘circular’ by 2030.
S'inscrire à notre newsletter
Partager Tweeter Partager 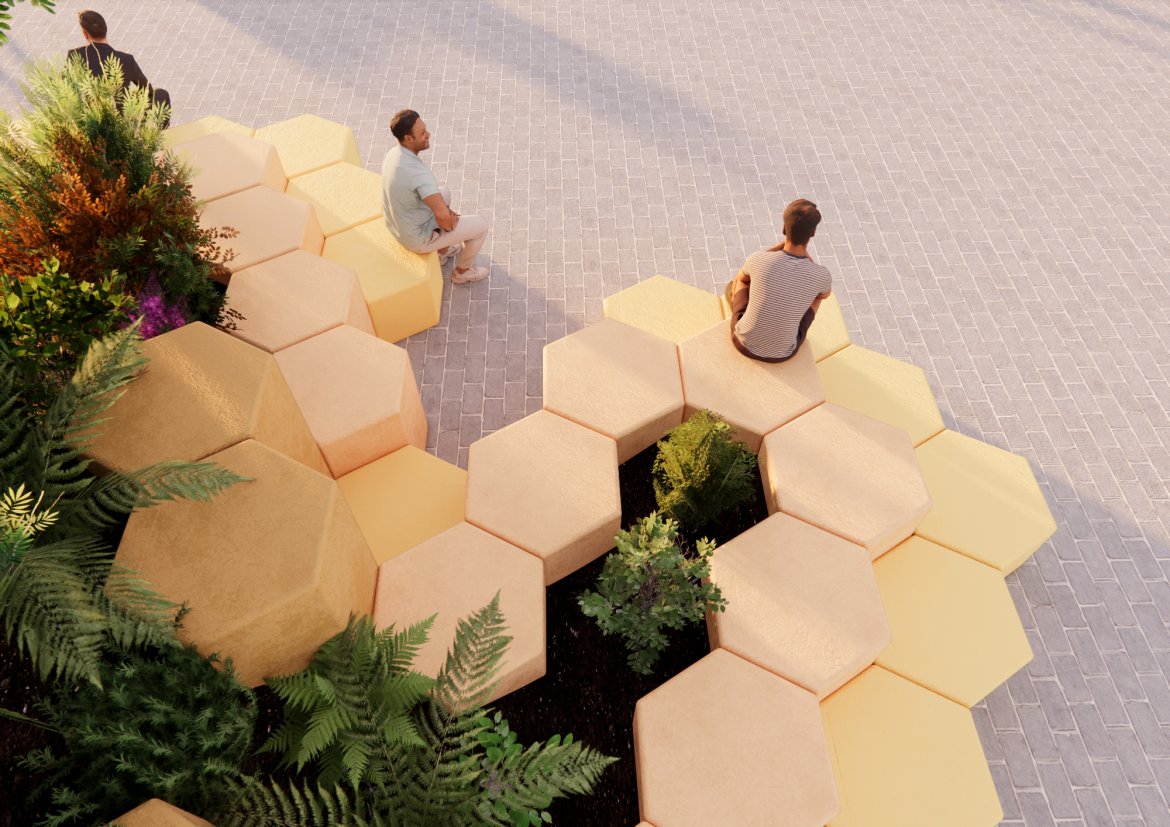 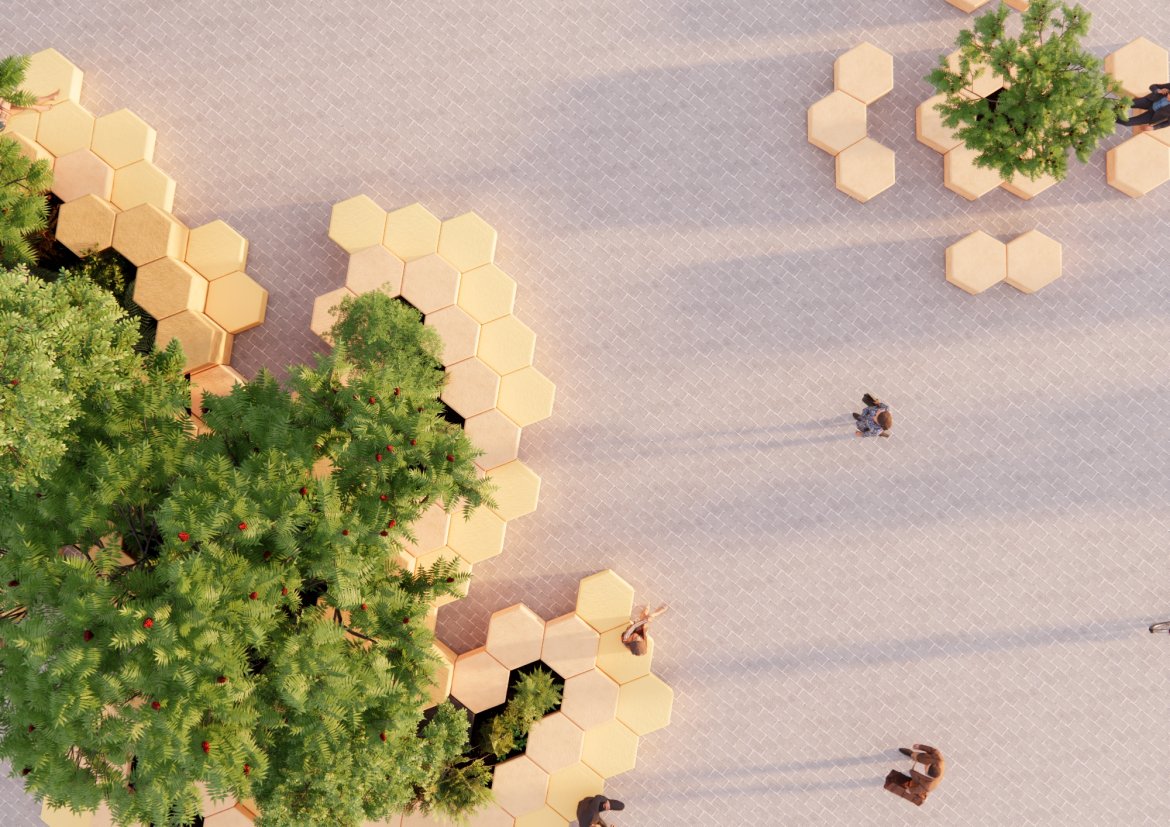 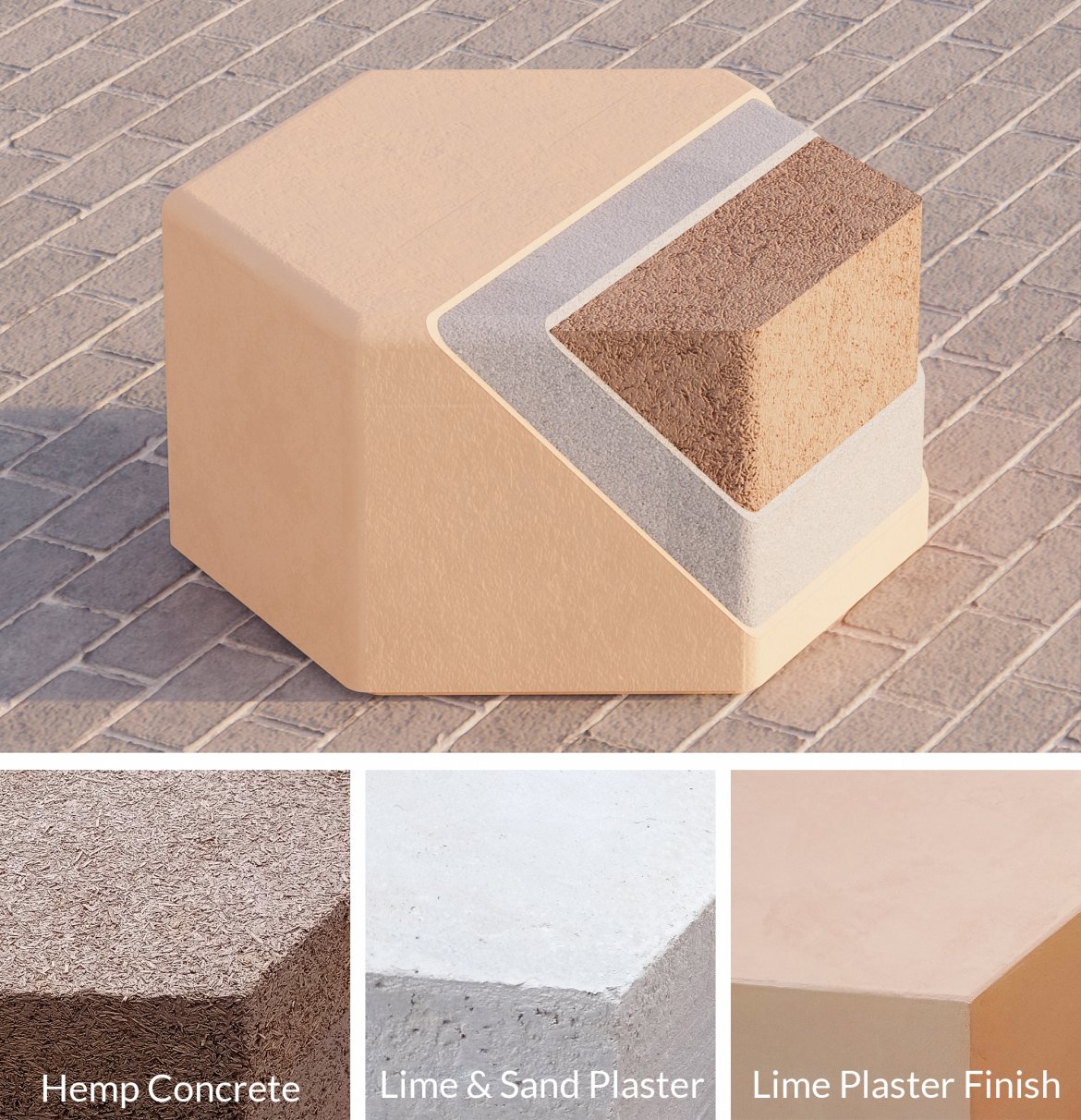 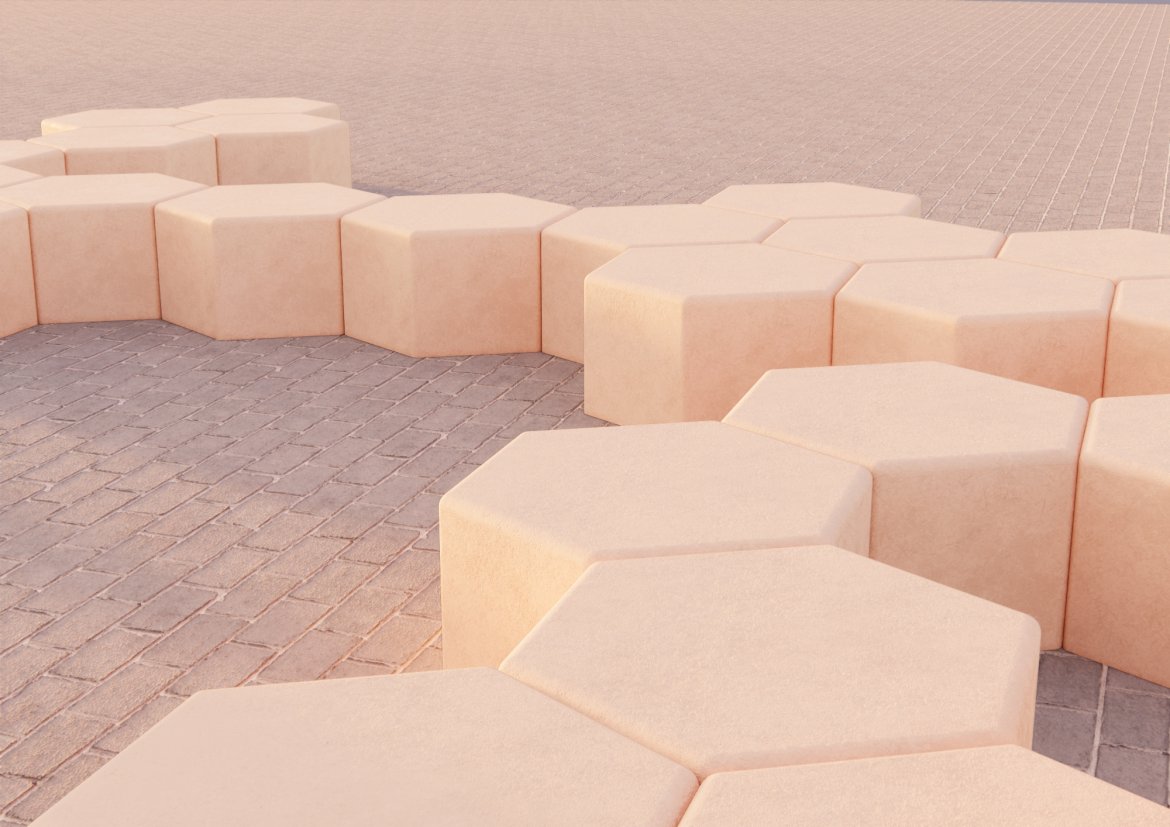 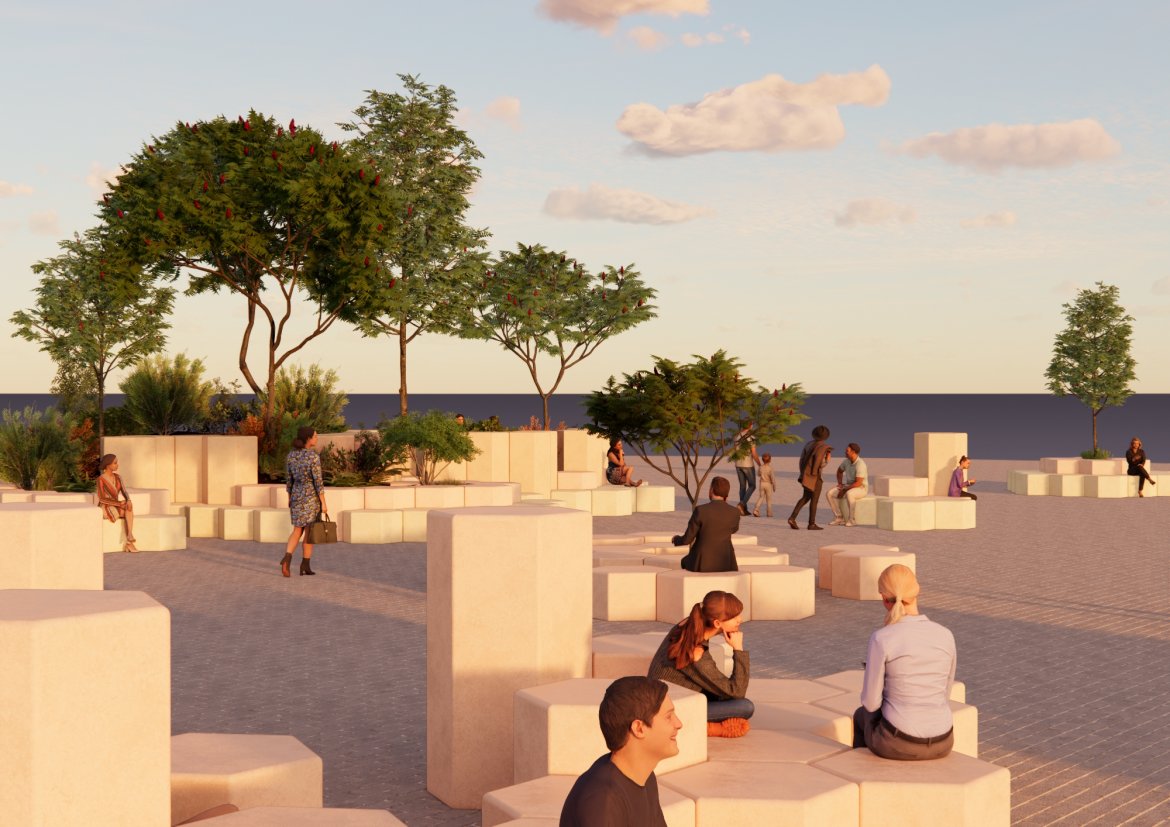